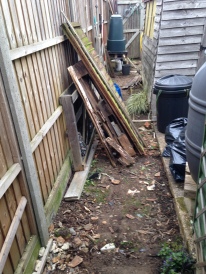 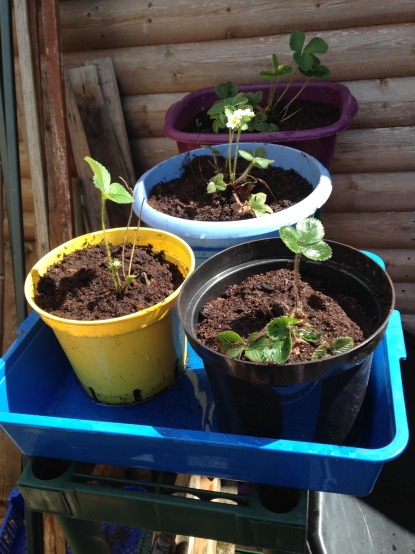 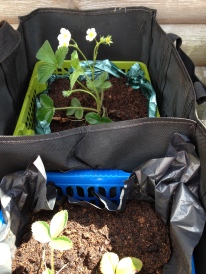 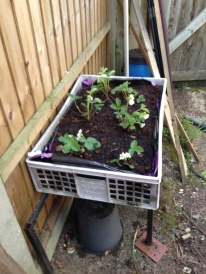 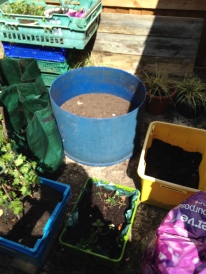 Despite having to work around the fact that a robin was flying in and out of the shed as we tried to sort, my son Thom, my daughter Annie, their spouses spasmodically, and I filled 8 rubble bags that Easter Monday 2016. Some was sheer RUBBISH…paper, card, half pencils, broken screwdrivers, hundreds of Rawlplugs squashed underfoot to mention but a fraction. Some was scrap metal….box upon box, mini drawer upon mini drawer FULL of screws and nails, (90% of which were rusty where the roof had leaked for over a year of “abandon”), a large number of saws (also very rusty), multifarious screwdrivers, innumerable socket sets and, for some reason about 6 plasterers trowels. (more about those at a later date); and of course there were those inevitable items where we could not decide what to do…so they went into the “special ” bag…to be sorted later. At the time of writing this post, they  remain unsorted… but now removed to the drier conditions of the garage, which like many nowadays is too small for my car so is a wonderful storage location.

So began the wait for the young birds and their parents to “flee” from the Shed of Doom. I became very impatient and decided  to embark on the first stages of my plan for the space that would be created when “The Shed” finally came down.

Now let me divert from the present story.

When we bought our house in 2004, we fell in love with the space it had to offer on our first visit. The fact that its price fell by almost £20,000 between our seeing the agent and having a viewing DID help with our decision. The previous residents had three dogs…two of which were Newfoundland terriers…BIG dogs. Their third was a Labrador (not small). The inside of the house had been altered to accommodate the dogs, but that is immaterial; more important is the fact that the garden at the rear of the house has A LOT of concrete/cement, and having come from a Vicarage with a LARGE garden we had to adapt. LOTS  and LOTS of plants in pots, and even growing runner beans in the trough between the bottom of the fence and the footpath. In addition to the shed there was also (and still is) a Summer House, and behind the shed another piece of concrete which was very obviously the section where the dogs were allowed to “do their business”; the route from the kitchen door along the garden to the “space” being fenced to guide the pooches to the correct place.

SO, whilst waiting for my” dickie birds” to leave  the shed, I started to “green up” the small section behind the shed.

The point here is that, obviously , anything I wanted to grow was going to have to be in containers…there is no soil  in over half of the rear garden.  So I started with the strawberry plants which for the last two years have been in the FRONT garden, in containers, vegetable baskets from the supermarket, and now they needed replanting…..into more vegetable baskets! The important thing is that apart from buying compost, all the “planting” that you can see, was done into containers that were ALREADY on the premises, hence I was spending NOTHING on containers at this point.. Remember my telling you that the man who had just left me never had to ring for a tradesman? That he had a selection of “things that will come in handy”? In the photos you can see some of the proof, and you can also see that the “Shed” is still standing as I start my “greening” of the concrete.

This is a text widget. The Text Widget allows you to add text or HTML to your sidebar. You can use a text widget to display text, links, images, HTML, or a combination of these. Edit them in the Widget section of the Customizer.